Given that the videogame industry is overrun with generic first-person shooter titles, fans of less popular gaming genres, like turn-based strategy games, sometimes feel left out of the proverbial party. In that case, sometimes it is better to throw one’s own party, which is what programmer David White did when he developed his excellent fantasy-themed freeware strategy game, Battle for Wesnoth, first released in 2003.

A true Open Source project, the Battle for Wesnoth team now features over 100 contributors who are programmers, artists, writers and musicians that have collectively created a rich gaming world unlike any other in the industry. One of the members of the Wesnoth community created an iPhone version of the game which was available for a time before the developer lost interest. Thankfully, two new versions for the iPad and iPhone by a new developer are now available at the App Store. The gameplay remains essentially the same.

Battle of Wesnoth for the iPhone, iPad, and iPod Touch Features

A Heir to the Throne on a Modern Cell Phone

Wesnoth at its core is an old school fantasy wargame. Its maps use a hexgrid with “zones of control”, so applying time-honored “Avalon Hill” tactics to the fantasy milieu is the key to success in the game. There is a small tutorial at the beginning to learn the basic controls; after that, the user can choose from a nice array of campaigns of various difficulty levels to get into the game. 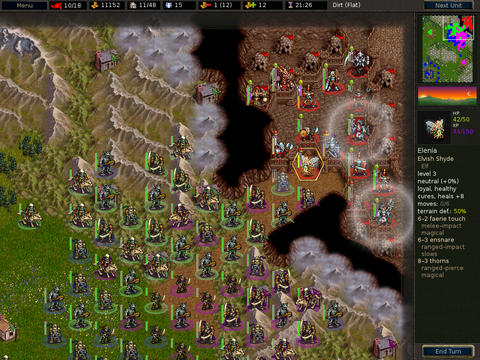 In Battle of Wesnoth, campaigns are a collection of related scenarios that tell one of the many stories of Wesnoth. In a similar manner to SSI’s legendary Panzer General series, the player’s units in the game gain experience and thus advance in ability throughout the campaign. Protecting these core units is another important key to success.

“Heir to the Throne” is the recommended first campaign for newcomers to Wesnoth. Telling a story of family betrayal and greed, it’s the perfect introduction to this fantasy world.

The iOS version of Wesnoth is pretty close to a straight port of the actual game. Considering the resource constrained environment of the iPhone or iPad, this is an amazing programming achievement. The multiplayer mode features cross platform gaming, so an iOS user can play against someone with a Linux box, for instance.

The only complaints about the iPhone version of the game relate to parts of the interface that don’t translate well to the smaller screen real estate of the iPhone. Essentially, the buttons are too small and sometimes hard to trigger. Finger swiping is effectively used to scroll maps, however. The HD-branded iPad version of the game fixes these issues.

Given that The Battle for Wesnoth is an Open Source project (under the GPL License), a minor controversy ensued because of the $3.99 price of the game at the App Store. David White and others on the project fully support the iOS version.

Battle for Wesnoth for the iPhone is highly recommended for fans of old school fantasy gaming. At 300-350 MB depending on the version, it is a large download, but the richness of the game is well worth the extra bandwidth.