Bloom is a generative music app developed by the legendary ambient musician and producer, Brian Eno. We use the app in Quarkspace, and anyone with a passing interest in soothing music should check it out. I wrote a review of Bloom for another site with which I formerly had an association. Bloom is still available for the iPhone, and an iPad specific version is also for sale at the App Store.

Here is the review:

Brian Eno has long been a famous ambient musician and record producer. From his early days manning the VCS3 Synthesizer for Roxy Music while dressed in drag, to his ground-breaking “Frippertronics” guitar delay system developed for Robert Fripp, Eno lives on the forefront of musical innovation.

So it makes perfect sense that one of the most talked-about music apps for the iPhone is Bloom, a generative music application co-developed by Eno and fellow music innovator, Peter Chilvers.

At its core, Bloom is an “ambience simulator”. The application sits peacefully waiting for the user to engage it through a finger swipe or tap. Delayed bell-like tones emit from the software in response to the interaction, along with floating graphics that appear in sync with the music and effects. These tones build over time through the use of delay and droning pad-like background sounds. The iPhone’s multitouch interface is effectively used, allowing for “chords” and other intervals to be played by tapping with more than one finger.

Upon starting the app, the user is prompted to either listen to a composition or create their own. Chilvers is an expert in the world of algorithmic composition, so just listening to Bloom do its thing is a great way to spend a half-hour. It obviously also works great as an ambient background soundtrack to any activity.

Bloom has three modes which are also selected at the beginning. “Classic” mode recreates the original version of the software with the same collection of sounds and graphic skins – called Moods. “Infinite” mode features additional Moods and a constantly evolving modulation of the software’s generative music patterns. Finally, “Freestyle” mode allows for the most control over the full set of Bloom’s Moods and settings. 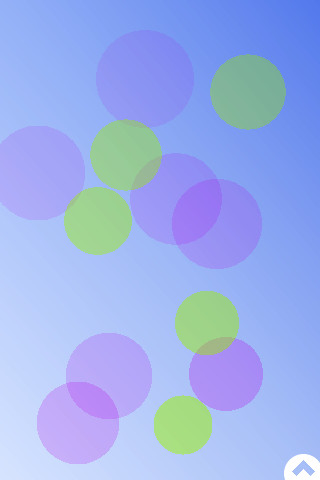 Each Mood has a unique color scheme and brings subtle changes to the composition’s key and background sounds. Sampling the different Moods is especially mesmerizing in Infinite mode with its constantly shifting ambience that starts when Bloom is left idle. The effect created by this sonic world is masterful; somewhere between Eno’s Music for Airports and the beginning of Pink Floyd’s classic epic, “Echoes” from their Meddle album.

Play Me and Control Me

Ultimately, Bloom is a musical instrument and a barrage of well-syncopated finger taps can easily summon the feel of a tuned percussion ensemble that disappears into a cloud only to return a few seconds later from another direction. The software effectively uses long delay and other effects along with generative music algorithms to accomplish endlessly fascinating changes to compositions. It’s almost magic.

Some of Bloom’s other settings control the delay time and sleep timer. Freestyle mode also allows the control of whether or not the sounds, Moods and delay time are shuffled during playback. Leaving those flags turned on makes for a more interesting sonic experience, especially the self-explanatory “Evolve when Idle” flag.

Bloom is available at Apple’s App Store as a $3.99 download. It’s easily one of the best values for any iPhone user with a passing interest in Ambient music. It’s a stunningly interesting piece of software.

Here’s a few recommended Brian Eno albums for those wishing to explore the artist.