Arguably, there is no better sports management game series than the one set on a baseball diamond from the folks at Out of the Park Developments. The game allows users to run their own baseball franchise like a proper simulation as opposed to the real-life results dependent world of traditional fantasy baseball.

I am currently playing the desktop version of the game, managing the 1920s era Cleveland Indians. This version of the Tribe followed up their real-life 1920 World Series win with a repeat title in 1921. Tris Speaker, Stan Coveleski, and the boys are the scourge of the American League. Ray Chapman is still the Indians shortshop, as Carl Mays’ tragic beanball that killed Chapman never happened in my game. In fact, Mays is currently doing quite well as the Indians’ fifth starter.

My ultimate goal, other than Cleveland’s continued success, is to ensure the New York Yankees’ dynasty never happens. Right now, the Yanks are Babe Ruth, Bob Meusel, and a lineup filled with scrubs, stuck in the lower half of the American League. What a great, noble game that allows someone to right one of the sports world’s greatest wrongs!

The iOOTP Series Brings Baseball Management to the iOS Platform

In 2011, Out of the Park Developments brought a condensed version of their baseball series to the iOS platform. The accurate simulation engine and player ratings from the desktop version made it to the mobile edition of the game; the only thing that didn’t quite translate was the full depth of a baseball franchise’s minor league system.

Staten Island is losing in this iOOTP Baseball 2013 game. Screenshot by Author.

Recently, iOOTP Baseball 2013 hit the iTunes App Store, and this iteration of OOTP’s mobile baseball management series remains a perfect way for baseball fans to manage their favorite team, or even an imaginary baseball franchise, while on the go.

iOOTP Baseball 2013 for the iPad, iPhone and iPod Touch Features

The game includes the current 2013 Major League rosters with real player names, making it a great way to play out this year’s MLB season. Previous seasons are also available through in-app purchase, and when playing a historical simulation, the game automatically advances to the next season, with the real rookies being part of the next year’s draft class, provided that season was purchased. If not, the game will generate fictional players.

The accuracy of iOOTP Baseball’s simulation engine and player ratings make it perfect for gamers who love to replay actual baseball seasons, year after year. Those are the folks who won’t miss the full minor league systems that are a hallmark of the desktop version of Out of the Park Baseball. 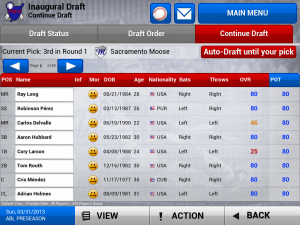 Fictional leagues in iOOTP 2013 start off with a fantasy draft. Screenshot by Author.

In my version of iOOTP 2013, I am playing a Fictional League that started with fictional players and a fantasy draft. My Staten Island 9 sports a lineup with robust power, but I think my pitching staff will keep me as an also ran at least this season. Still, the mobile version of OOTP is a great way to enjoy a quality baseball simulation while on the go.

Any baseball fan who owns an iOS device needs to pick iOOTP Baseball 2013. The game allows you to negotiate player contracts, sign free agents, make trades, draft amateurs, promote players from the minors, and more. Prepare to have your time gradually sucked away!

1 comment for “iOOTP Baseball 2013 Lets You be GM on your iPad, iPhone, or iPod Touch”