Apple finally announced the iPad mini this week, their attempt to protect iOS’s tablet market share against the influx of smaller slates led by the Amazon Kindle Fire and the Google Nexus 7.

But at a retail price of $329, is the iPad mini worth it compared to the cheaper Android-powered alternatives?

As always, the answer depends on what you want to get out of a tablet. If surfing the internet, consuming media, and managing email remain your main reasons for buying a 7-inch slate, the Google Nexus 7 is arguably the wisest choice. The Kindle Fire suffers from Amazon’s forcing consumers into getting all their content from the web-shopping giant, turning the iOS “walled-garden” metaphor into something closer to a prison.

Users wanting the best selection of quality apps need to consider spending a bit extra for the iPad mini. Developers still love writing for iOS despite Apple’s App Review board suffering from a unique combination of pretentiousness and inconsistency. From a musician’s standpoint, the iPad family’s fast kernel allows cool synth apps like the Korg iMS-20 or Animoog, which aren’t yet possible on the open Android platform.

The Larger iPad Wins for Me

As someone who uses the iPad primarily as a musical instrument, I just don’t see the point in the mini. The graphics resolution is the same as my iPad 2, but the knob twiddling required for the iMS-20 wouldn’t work as well on the iPad mini’s smaller screen. 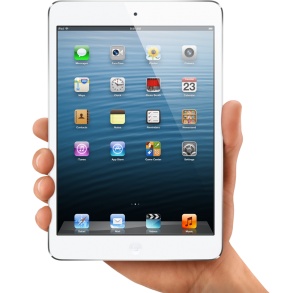 The same goes for game playing. It’s probably a personal bias, but gamers looking for a tablet computer should stick to the larger iPad models for the most immersive experience.

So before deciding between the iPad mini and the Google Nexus 7, first ask yourself, “what do I want to get out of this tablet?” If apps, go Apple; for the other stuff, go Nexus 7. It’s pretty simple.