Sufjan Stevens‘ music defies easy categorization. From the dreamy folk songs of Seven Swans to the confident eclecticism displayed on his “50 States Series” (Michigan and Illinois are released so far), Stevens is one of the musical highlights of today’s indie music scene. Who else can produce albums that sound like a cross between Nick Drake and Steve Reich?

While firmly a secular musician, Sufjan is also a practicing Christian, so he has always retained an affinity for Christmas music. This love for holiday music led to the release of a series of Christmas music EPs through his fan club. The Songs for Christmas release combined these five EPs into a box set for official release on his label, the brilliantly named, Asthmatic Kitty Records. He also released a new Christmas box, Silver and Gold, which will get a review here next Christmas if it is acquired (a link lurks below this article).

Over Songs for Christmas’s five CDs, Stevens features a nice cross-section of his own material combined with classic Christmas carols. The first disc, Noel!, is highlighted by a heartfelt “O Come, O Come, Emmanuel” which sounds almost like it’s his own song. The original “Going to the Country!” also resonates; an arrangement of banjos, guitars and sleigh bells frames an excellent song in the folk tradition. 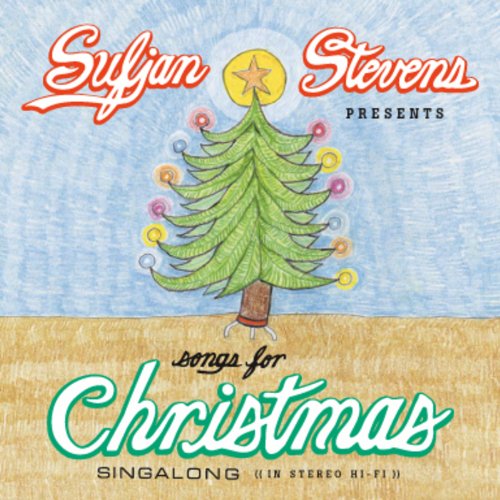 The infectious “Put the Lights on the Tree” is the star of the second EP, titled Hark! This original track features most of Stevens’ stylings in a tight two-minute Christmas package. The final result sounds almost like if Stereolab showed up at your door on a flat-bed truck caroling with full instrumentation.

“Come On! Let’s Boogey to the Elf Dance!” from the third EP, titled Ding! Dong!, could be a long lost Christmas classic from the Kinks. It’s another extremely catchy track with deft arranging and orchestration. The carol “O Holy Night” is the traditional highlight of this disc. Once again it sounds like a timeless hymn was written specifically for Stevens, especially when considering his banjo and glockenspiel overdubs.

An interesting take on “The Little Drummer Boy” leads off the fourth EP, Joy. Using acoustic guitar, vocal harmonies, sleigh bells, and no drums, Sufjan once again makes a classic sound like his own tune. A bit of thrashy guitars make an appearance on “Hey Guys! It’s Christmas Time”, a great track which sounds like it was co-written by Neil Young.

The final EP, Peace, is the longest of Songs for Christmas’s five discs, containing some of Stevens’ best material. His influences from the world of Minimalism make their strongest statement over the entire box set on “The Winter Solstice”, a wintertime classic in the tradition of Steve Reich and Phillip Glass. The poignant “Sister Winter” is another highlight from this fifth EP.

Songs for Christmas is a must purchase for fans of Sufjan Stevens as well as adventurous fans of Christmas or Holiday music. The box set also comes with other holiday goodies: including liner notes, photos, a Christmas songbook, and most importantly, stickers!