Here is another article that finishes off the trilogy of fine iOS casual games from Swedish developer, Donut Games. Channel your inner traffic cop with this title:

Swedish casual game development shop, Donut Games, is known for well-designed games that are perfect for taking a quick gaming break. Titles like Cows in Space and Rat on the Run are both a blast to play and feature high standards in graphics and interface design for the iPhone.

Traffic Rush is no exception. The gamer is placed in the role of a virtual traffic cop superhero, serving as a traffic monitor for a busy intersection in some proverbial large city. The goal of the game is to prevent an accident, as the fun ends once the first one occurs.

The game’s screen real estate centers around a large city’s intersection. Speeding traffic moves down both streets and it is up to the player to prevent a collision. This is accomplished in two ways. First, simply tapping a vehicle causes it to stop. The user can also speed the vehicle through the intersection with a timely iPhone swipe. The last maneuver is tracked in the game’s stats as a “Fast Swipe”. 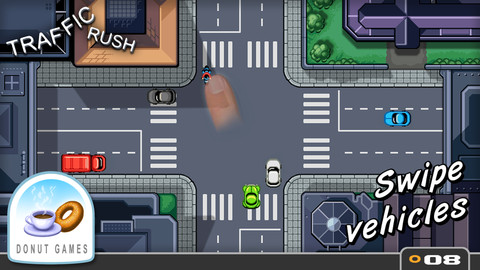 Actually the gameplay in Traffic Rush gets pretty stressful quickly. While most of the traffic is speeding, there are the occasional Sunday drivers who putz along, annoying both their fellow virtual drivers and the person playing the game. These vehicles tend to be the ones needing a fast swipe. If only traffic laws and technology allowed the same thing in real life!

As the traffic flow continues, it tends to get busier and more complex as slowpokes appear more often. Just being able to last a full minute of gameplay is an accomplishment, and frankly, that is the point of a quick, casual game. Whether or not Traffic Rush is a stress reliever depends on the gamer’s point of view.

The game tracks the players “score” by counting how many vehicles make it through the intersection, their average speed, the number of fast swipes, and the total play time for that session. These stats are also aggregated game by game; the user can view the totals from the main menu.

Traffic Rush is a great way to kill a minute or two as either a stress reliever or stress enhancer. A real life crash caused by someone playing the game while driving would be an interesting irony. It’s a recommended download from the App Store.

← Rat on the Run for the iPhone, iPad, and iPod Touch
Unibroue Brings a Taste of Belgian Beer to North America →