UniWar is a turn-based strategy game for the iPad, iPhone and other mobile platforms. Developed by Javaground and now offered by TBS Games LLC, the focus of the game is its multiplayer online community with over 70,000 registered players. Despite that, there is also a campaign mode for solitary gamers that does a fine job of explaining the game’s mechanics.

UniWar for the iPhone and iPod Touch Features

The core of UniWar’s gameplay is in the manner of a classic turn-based strategy game played on a hexgrid. Since a game has a science fiction setting, the user can play one of three races: the human-like Sapiens, the reptilian Khraleans, or the mechanical Titans. Each race has its own strengths and weaknesses, and thus are well-balanced against each other. 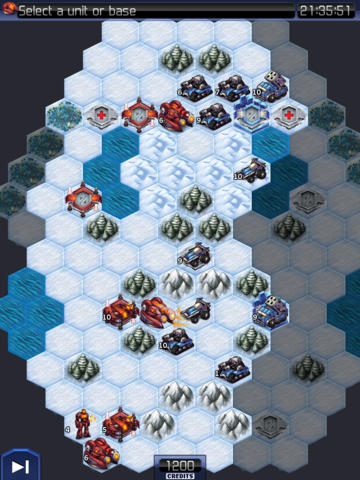 UniWar looks great on the iPad.

There are four different basic unit types in the game: Ground Light, Ground Heavy, Aerial, and Aquatic. The three races have eight different units spanning these four types. Understanding how the racial differences affect the various units is key to being successful at UniWar.

Like most strategy games, real-time or not, UniWar uses a resource acquisition model for unit construction. The key in most scenarios is capturing bases, which produces more credits, which are then spent on new units. The game’s colorful maps feature a host of different terrain types that affect both unit movement and combat factors.

A Multiplayer Online Strategy Game to Rule Them All

While the solitaire campaign mode is the best way to learn about UniWar and its backstory, its various online multiplayer modes are the focus of the game. With over 70,000 registered players, there isn’t much difficulty in finding an online game against human players of all skill levels.

Up to 20 simultaneous multiplayer online games are possible, which can overload one’s email inbox as email notifications are sent to the player when it is their turn. There is an even a hot-seat mode where two players can play each other on one device. UniWar’s servers also provide various chat facilities to allow for inter-game smack talk.