The next iteration of the preeminent video game pinball franchise hit the PlayStation Network this week. Zen Pinball 2 is now available as a free download and current owners of the original game (like me!) and Marvel Pinball (like me!) can import all their older tables into the new version at no cost.

Actually, “import” isn’t really the correct verb. Updated versions of each table are first downloaded from the PSN, as the ZP2 software checks one’s Zen Pinball purchasing history; making the unlocks available for every previously paid-for table. The process is a little more confusing than it needs to be, but you can’t argue with the price.

PS3 pinball wizards who also own the PSVita (all twelve of you!) also get mobile versions of their Zen Pinball table library for their handheld device. This cross-platform love deserves the giving of many props to the folks at Zen Studios.

The high-scores and trophies on the original tables don’t get imported to the new editions. The enhanced physics engine for Zen Pinball 2 warrants actually hitting the tables and setting new high scores. All previously earned trophies do stay with a gamer’s PSN account.

The main interface of Zen Pinball 2 is greatly improved from the original. The full table library is accessible from one screen, with links to scoreboards, trophies, and game settings easily accessible at the bottom. 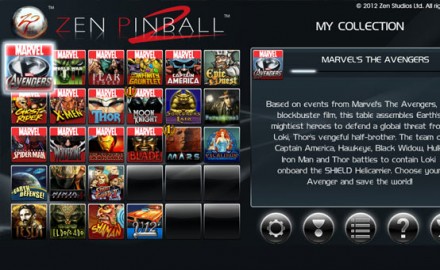 The gamer can also download and try out tables they don’t own at no cost. Twenty-six tables are currently available at launch, including a new Plants vs. Zombies edition. Each table also features a detailed guide which helps greatly in achieving the best scores possible.

Of course, the game’s graphics and physics engine are greatly improved. Launching a ball now uses the right stick, making it more rewarding to score skill shots. Bounce and ball movement feel more natural. The game even sports a 3D mode for those equipped with 3D televisions.

Zen Pinball 2 also sports improved social network features, including the ability to post scores to one’s Facebook account. This is a feature I promise not to use!

Any PS3 owner who loves pinball and hasn’t yet tried the Zen Pinball series — what’s, uh, the deal, yo? Fans of the original series need to fire up their PlayStation Network accounts and start downloading! Let’s play the silver ball!