Gettysburg, a small town in Pennsylvania, was the site of the most important battle of the American Civil War. The town today is a veritable Disneyland of history. Sure it’s over-commercialized, but it remains a spot worthy of a visit for both Civil War buffs and those interested in American History.

The new Visitors Center with its restored Cyclorama highlight a trip to the sprawling battlefield. Gettysburg’s downtown commercial district features a host of shops, restaurants, and other historic sites worth exploring.

Gettysburg: the Turning Point of the American Civil War

In the summer of 1863, Robert E. Lee’s Confederate Army of Northern Virginia was flush with success after routing the Union at the Battle of Chancellorsville. Lee decided to invade the North hoping for a better result than the previous year’s invasion which culminated in a strategic defeat at bloody Antietam. 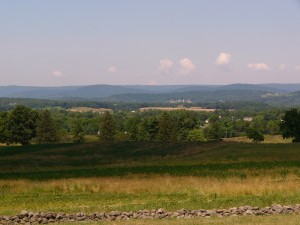 The Confederates were countered by the Union Army of the Potomac, led by General George Meade, who took over command after the previous general, Joe Hooker, was sacked after Chancellorsville. The two armies discovered each other in a classic meeting engagement northwest of Gettysburg on July 1st, where a legendary stand by Union Calvary General John Buford prevented Lee’s army from occupying the strategic high ground south of the village.

The battle continued for two more days as Lee attacked both flanks of the Union army south of Gettysburg with Meade skillfully using his interior lines of defense along with the advantageous terrain to repulse the Confederate assaults. Lee threw caution into the wind on the third day of battle with an ill-advised assault of the Union center, better known as Pickett’s Charge, which was broken with heavy casualties to the southern army. 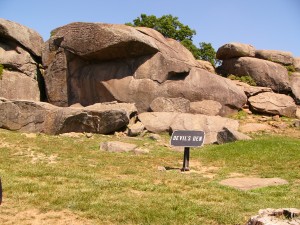 Devil’s Den was the scene of some particularly bloody fighting during the Battle of Gettysburg. Photo by Angela Williams.

Gettysburg was the bloodiest battle of the Civil War with over 51,000 casualties on both sides. It’s known as “the High Water Mark of Confederacy”, because after Gettysburg the south never again threatened the north with a full army. The Civil War continued on for two more bloody years.

A visit to Gettysburg today centers on the new Visitors Center southeast of town. For one price, visitors can see both the museum and the beautifully restored Cyclorama painting depicting Pickett’s Charge, as well as “The New Birth of Freedom”, an excellent film of the battle narrated by actor, Morgan Freeman. The Visitors Center also has an excellent gift-shop with a great supply of Civil War books; there is also a small restaurant. 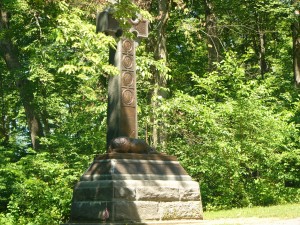 The Irish Brigade Memorial is one of the most striking on the Gettysburg Battlefield. Photo by Angela Williams.

For those not familiar with the battlefield and its history, renting a Licensed Battlefield Guide is worth the price. Bus Tours of the battlefield are also available. Civil War buffs may want to pick up an auto-tour brochure, or simply trace their own way across the Gettysburg and the surrounding area.

The battlefield is home to hundreds of monuments in all shapes and sizes. The monuments tend to follow the lines of battle, with the Confederate monuments being mostly in the woods southwest of town, where Pickett’s Charge originated.

Food, Lodging, and Shopping at Gettysburg

Gettysburg is home to a massive amount of food and lodging options. There are many Bed and Breakfasts in town itself. Most of the chain hotels lie on US30 on the east side of town away from the battlefield. A recommended place to stay is the Quality Inn Gettysburg Motor Lodge which is within easy walking distance to some of the best parts of the battlefield as well as Gettysburg’s downtown commercial district.

The historic Dobbin House dates from the 1700s and is great place to get traditional American food. O’Rorke’s Eatery and Spirits is a casual place to get a bite to eat with a good beer. This place is a favorite of Civil War reenactors. Beer connoisseurs need to check out the Appalachian Brewing Company, on Buford Ave. northwest of downtown, right next to Lee’s Headquarters building. It’s a great restaurant with a great sampling of beers brewed on-site. (author’s note: Both the ABC and the Lee’s HQ Quality Inn are slated to be closed due to renovation of Lee’s HQ and the surrounding area.)

Shopping options are in abundance throughout historic Gettysburg, mostly with a historic flavor. There are a few excellent bookstores as well as places to acquire period costumes for reenacting. Ghost walks and tours are quite popular, with many different tours located in the center of town. There are also other historic sites in town, with the David Wills House and Soldiers Museum being two of the best.

Gettysburg is a perfect place for a historic weekend getaway. There is plenty to do for fans of the Civil War or just anyone interested in American History in general.

Here are two excellent books on Gettysburg I heartily recommend:

Related articles across the web