The following a comparison article between two popular brands of single-serve coffee makers — Keurig and Tassimo. It formerly existed at an online magazine with which I no longer maintain a relationship.

Coffee is arguably the most popular legal drug on Earth. From the days of Joe DiMaggio’s Mr. Coffee and beyond, brewing a quality Cup o’ Joe in one’s own kitchen has led to a rather large industry of home coffee brewing appliances. Recently, the single-serve coffee marker has come to lead the market for home brewing with their convenient single-serve containers providing a perfect cup of gourmet coffee or even tea or hot chocolate.

Keurig and Tassimo are the two biggest names in the single-service coffee making industry. Both companies are known for making (Bosch manufactures the Tassimo brewers) high-quality appliances that brew a great cup of coffee. So what are the differences between the two? Is one brand better than the other, or do they serve different needs? A comparison of both brands follows.

The Differences Between the Keurig and Tassimo Brewers

Looking at the top two bullet points for both models reveals the main difference between the Keurig and Tassimo brewers. The Tassimo brewers tend to be more expensive than the Keurig models, although holiday rebates are sometimes available for the Tassimos. 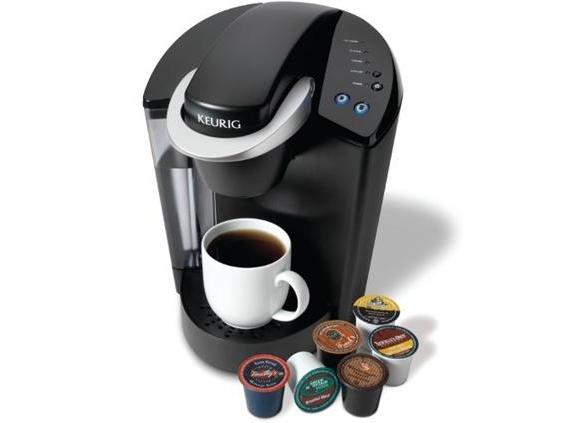 While their models are more expensive, the Tassimo brewers provide more functionality, since they brew lattes, cappuccinos and espressos in addition to the standard coffees, teas and cocoas provided by both machines. Tassimo claims their bar-coded brewing system assures a perfect brew each time, but since the point of all single-serve brewers is the perfect cup of coffee, any advantages provided by the bar-coded brewing method are limited to the ability to brew lattes, espressos, etc.

Both models are relatively easy to clean with dishwasher safe parts.

At the core of both brewing systems is the single-serve container called a K-Cup for the Keurig models, and a T-Disc for the Tassimo models. Both companies offer a whole host of popular coffee brands for their brewers, with Tassimo winning the battle for Starbucks fans as the Seattle brewer’s wares are available on T-Discs. Because of the additional capabilities of the Tassimo models, various lattes, cappuccinos and espressos are available only in T-Disc format.

The K-Cups provide some brand sizzle for Keurig owners, offering the Emeril line of gourmet coffees along with Newman’s Own. Hot Chocolate fans also have many K-Cup options, including offerings from Green Mountain. But Keurig owners can now also stay at home instead of schlepping to Starbucks to get a branded latte or espresso.

Pricing between K-Cups and T-Discs are pretty comparable, with 12 and 24 count packages being the most popular. So despite the fact that a Tassimo owner will spend more up front for a brewer, the actual beverage costs work out to be similar in the long run.

Paying More for a Starbucks Latte

Since both the Keurig and Tassimo brew a perfect cup of coffee, the essential difference between the two brewing machines is the extra cost for the ability to brew lattes and espressos. Starbucks fans who want a branded cappuccino should check out the Tassimo models, while coffee fans looking to save a few dollars and aren’t interested in frothy coffee drinks will be happiest with a Keurig. Both models are excellent home appliances.