NimbleBit’s Tiny Tower app for the iOS platform continues to serve as a form of crack for any iPhone or iPad gamer. The game is an economic simulator based around a skyscraper populated by “bitizens” going about their daily lives hoping to score their dream job at one of the businesses residing in Tiny Tower.

The game deservedly won kudos from Apple as the 2011 iPhone Game of the Year. Its 8-bit graphics and music delight, making the job of managing one’s Tiny Tower relatively easy — that is, until the tower grows to over 150 floors. 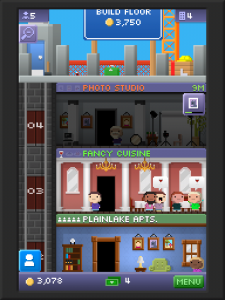 Fancy Cuisine is where Bryan Ferry and the In Crowd hang out in Tiny Tower.

That’s where things gets a little harder to manage in Tiny Tower, and the game even hits a floor limit (which thankfully has grown with most app updates from NimbleBit), essentially shutting things down for the gamer. Sure, one can build new empty floors, but no businesses or apartments can be constructed inside them.

By doing those four relatively simple tasks — depending of course on the game’s data design for task #1 — Tiny Tower’s replay value is greatly increased. Frankly it’s sad looking at those empty floors at the top of my Tiny Tower.

← Ralph Kimball, the Father of Data Warehousing and a Father of the Modern Computer OS
The Software Engineering Institute is Carnegie Mellon’s Star →