So what is the current status of the #Agile #softwaredevelopment methodology? twitter.com/LeonTranterEU/…

Insights on how #AI is helping to usher in the #HealthTech revolution. twitter.com/TamaraMcCleary…

Make it so, #Cymru. twitter.com/BBCWalesNews/s…

There are a smattering of decent skiing titles across a variety of platforms, with the Ski Challenge series especially standing out for a quality downhill experience. But there is no game there, just a succession of time trials competing for the best time against players all over the world. If the developers would just add an actual career mode with RPG-like modeling of attributes and equipment, they would be on to something. 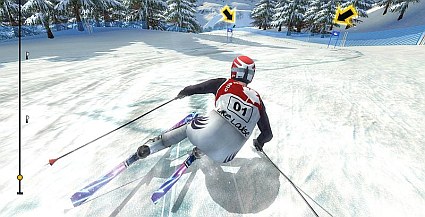 For now, check out this review from a few years ago of Bode Miller Skiing for PS2.

World Cup Skiing fans looking to display their Nordic skills on a videogame console have had to look long and hard for a videogame that features all disciplines of their favorite sport. Sure there are quite a few snowboarding games where performing tricks is more important than skill on the slopes. There are also a host of “winter sports” games, most of which relegate the downhill to the status of a simple mini-game.

Bode Miller Alpine Skiing, developed by Valcon Games and released in 2006 for the PC and PlayStation 2, is centered around World Cup level alpine skiing, and features the four main disciplines of the sport: Downhill, Super-G, Giant Slalom, and Slalom. While most of the reviews of the game were less than enthusiastic, a significant number of those reviews were complaining about the lack of snowboarding and lamenting on how to perform a trick. For traditional skiing fans, the game is fun to play and is faithful to the World Cup Skiing experience.

Beginning a Career as a World Cup Skier

Bode Miller Alpine Skiing does an excellent job of simulating the full World Cup Skiing experience. The heart of the game is its career mode, where the user can either generate a new player or play as Bode himself. A new skier starts out in the Junior League, hoping to earn the right to ski in the higher leagues by either finishing in the top three in one of the four disciplines, or by finishing in the top five in the overall rankings.

The player’s character has talent ratings in each of the four skiing disciplines along with four other skills: fitness, technique, strength and motivation. As the season continues, the player hires various trainers to improve these four skills. The better trainers obviously cost more money. A player earns experience points by performing well in races. When a player reaches each new experience level, points are awarded which are used to increase the talent ratings.

There is also a ski shop with loads of equipment that also increase a skier’s overall ability on the slopes. The player uses their World Cup earnings to buy better equipment in addition to hiring trainers or even a better waxer. Yes, waxing is simulated in the game as well, either by hiring a good waxer or the gamer doing the waxing themselves.

The game features actual World Cup ski runs from some of the top ski resorts in the world. Despite many complaints in the reviews about how every mountain in Bode Miller Alpine Skiing looks the same, that simply isn’t the case. While the images used as tree graphics do look too similar, each mountain resort in the game features its own unique graphic background with the actual ski runs.

The animation is fast, with the downhill races especially giving an excellent perception of speed, even on the older PS2. The weather graphic effects are also nice. Racing the downhill at Kandahar at sunset with the mist rolling around the course is a treat that can only be experienced in this videogame, short of real life.

The differences in the four skiing disciplines are also well-done. Both the sheer, frightening speed of the downhill and the precise touch of the slalom are represented in the game. Sure, one can’t perform a double-flip while grabbing your skis or other combo tricks in Bode Miller Alpine Skiing, but that’s not the point of this game. It’s a point most of the previous reviewers missed as well.

If you are a fan of World Cup Skiing, Bode Miller Alpine Skiing is really the only videogame in town. It’s available pretty inexpensively either new or used. Since Valcon has also released a few games on the PlayStation Network, maybe a “Lindsey Vonn Alpine Skiing” for the PS3 would be a good seller on the PSN?