Cows in Space is an excellent little mashup between billiards and a space shooter from Donut Games. Here is a review I wrote for a company with which I no longer work. Note that the game is now available as a universal app for the iPhone, iPod Touch and iPad.

Donut Games is a Sweden-based developer of casual games for the iPhone and the Flash platform. One of their top titles is the brilliantly bizarre Cows in Space. A mash-up of the space shooter genre and billiards, Cows in Space has to played to be believed, and is about the perfect two-minute game.

The premise of the game involves cows floating in outer space imprisoned inside bubbles. Obviously they need rescuing, so there are also star tokens floating in space. When a star token touches a cow’s bubble, that bubble bursts, allowing the cow to teleport safely back to earth. How does a star touch a bubble? By firing a pink jelly ball at them which sets the token in motion when touched. The angles and strategies of Cows in Space are very much like a bizarre game of billiards.

A Pool Hall in Outer Space

A new game of Cows in Space starts with one unlocked level that serves as a tutorial. Each level features a number of cows to rescue, a number of star tokens and finally, a limited number of pink jelly balls. All cows on each level must be rescued before the supply of jelly balls is used up. There’s no Smuckers in outer space. 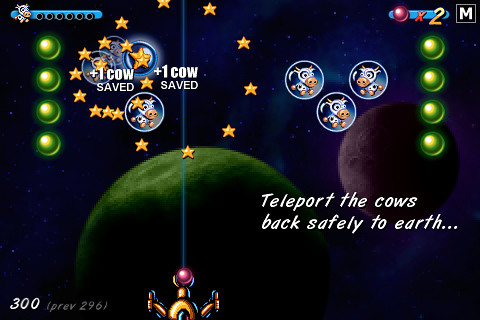 After successfully completing one level, the next level is unlocked. Each new level has a successively more difficult board to clear. The game does an excellent job of high score tracking and awards stars based upon the player’s score for each level.

Cows in Space also has excellent replay value. The game features 50 levels which should keep most gamers busy for a long while. There are also new game elements that get introduced over time, such as poison tokens that kill a cow when their bubble is touched, or special tokens that contain extra jelly balls. Maybe Smuckers does deliver to outer space?

Donut Games has an entire library of casual games with high standards in both graphics and gameplay. Their Cows in Space is a blast to play and is highly recommended to any iPhone owner looking for a fun and addictive game experience. In the meantime, check out this cool free racing game for the iPhone.

← The Tassimo Bosch Single-Serve Hot Beverage System
Rat on the Run for the iPhone, iPad, and iPod Touch →

2 comments for “Cows in Space for the iPhone, iPad, and iPod Touch”