On the heels of the previous article on Donut Game’s excellent Cows in Space, here is another one from a site for which I used to write on the fun platform game, Rat on the Run.

From the days of Activision’s Pitfall! for the Atari 2600 and Donkey Kong in the arcade, all the way to today’s Little Big Planet for the PlayStation 3, platform gaming has continually maintained its popularity as a video game genre.

Swedish developer, Donut Games, is getting a name as a top rank producer of casual games for both the iPhone and for Flash, and their Rat on the Run is a nice take on the world of platform games. Rat on the Run uses a simple premise. The gamer is a mouse who needs his cheese fix and thus must travel through the platformed game world, collecting cheese while avoiding the various hazards.

Rat on the Run Features

Upon starting Rat on the Run, the user can choose between three different game modes. The level-based mode, similar to Donut’s excellent Cows in Space game, contains 15 levels which include two tutorials. Each level must be finished before the next one is unlocked. There is an arcade mode with eight levels giving the user three lives along with a normal videogame scoring model. Finally, there is an interesting Rat on a Scooter mode that is insanely hard and hyper-fast. 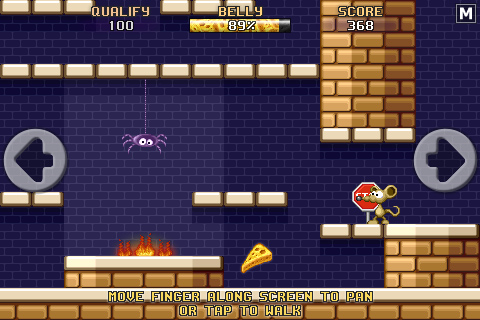 Rat on the Run is a nice take on the platform genre. Copyright Donut Games.

In the first two modes, the user starts the rat moving by tapping the screen. The rat will continue to move eating any available cheese along the way, until he hits a barrier, a stop sign, or any of the game’s lethal hazards. A barrier causes the rat to change direction, while the stop sign makes the rat stop. The user taps again on the iPhone’s touchscreen when the rat is moving to make the rat jump. A longer tap means a higher jump.

The level-based mode offers the deepest gameplay in Rat on the Run. Instead of having three lives and dying when touching a hazard, this mode has a meter that tracks the fullness of the rat’s belly. Cheese is digested as the rat moves around the level, so it is important to keep finding the food. Touching hazard causes a penalty, and it one is touched on an empty belly, the level ends.

Rat on the Run is another great release from Donut Games. It’s a classic platform game keeping the traditional gaming genre alive and well on the iPhone platform.

1 comment for “Rat on the Run for the iPhone, iPad, and iPod Touch”