Here’s a republished take on the iPhone classic, Finger Physics.

Finger Physics, by developer PressOK Entertainment, manages to hit that proverbial gaming sweet-spot of being both fun and educational. The game uses real-world physics as a backdrop for a collection of mini-games where the user must complete various tasks; like using shapes to build a tower or other structure, or breaking pieces of glass to allow an egg to safely fall into a basket.

The full version of the game is available at the iTunes App Store for only $0.99.

An Online Physics Course on a Cell Phone?

After starting a game of Finger Physics, the user must choose which stage and level to play. Each stage contains nine levels each with its own physics-based mini-game that needs solving. Like life, the puzzles get more difficult to solve as more stages and levels are unlocked. 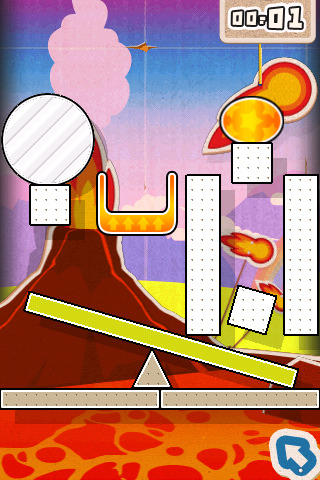 Though the basic premise of the mini-games involve saving eggs or building things, there is enough variety in both the level design and in the different types of objects used on each puzzle. In certain levels, some objects are magnetized, so blocks with opposite polarities must be used when building structures.

Some levels take place underwater, with floating or sinking blocks serving the same role as the magnetized objects in other levels. Other levels include exploding shapes which add to the general frivolity. The shapes themselves also become more complex as the game advances adding to the difficulty of tower and structure construction.

A Gold Star on this Physics Test

A colored star is awarded after each level is successfully completed. To earn a gold star, the level must be completed in an insanely fast time. Level repetition is the key in earning anything beyond a bronze star, especially on the construction levels where the user doesn’t know all the shapes available to them on the first run through.

This is the kind of game that is perfect for the iPhone. The interface is simple and elegant, with finger swiping and tapping being the only gestures necessary to play the game. Finger Physics is that rare kind of videogame that is both educational and fun to play. Everyone from elementary students to doctoral candidates should check it out at the iPhone App Store.

← Duvel is a Fine Belgian Ale for Beer Snobs and Everyone
iOOTP Baseball 2013 Lets You be GM on your iPad, iPhone, or iPod Touch →