Here’s a look at the fine line of Belgian Beer from Canadian Brewery, Unibroue.

The centuries-old tradition of Belgian Beer is told in the stories of monks, holed up in their abbeys, conjuring up vats of tasty ales using only the best ingredients. While there are many different styles of beer under the broad Belgian banner, ales tend to be the dominant type, with the strong “Dubbel” and “Tripel” styles gaining fame in North America as imports.

French-Canadian micro-brewery, Unibroue, has been producing Belgian-inspired beers since the early 1990s. They’ve gained a reputation for brewing high-quality Belgian ales at a non-import price. Their most popular brands are probably the golden-colored tripel, La Fin Du Monde, along with the strong dark ale, Trois Pistoles. 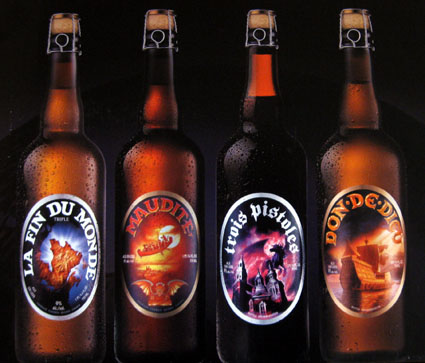 Four of the best from the brewery from Quebec. Copyright Unibroue.

All Unibroue beers a brewed with an age-old brewing process that uses partial filtering. These aren’t corporate-produced, bland-tasting clear lagers. They are all full-bodied with little of the bitter beer flavor typical of mainstream breweries. Unibroue’s all natural brewing process means there are no preservatives or chemical additives used during production.

The oldest beer currently in Unibroue’s lineup is Blanche de Chambly (ABV: 5%), a white ale that features a crisp clean taste with moderate alcohol content. Éphémère (ABV: 5.5%) is another clean tasting white ale with a strong but pleasant apple taste.

Chambly Noire (ABV: 6.2%) uses roasted malt in the brewing process, creating a black ale that still provides a clean finish. The hard to find Seigneuriale (ABV: 7.5%) is probably Unibroue’s hoppiest beer, tasting like an exotic IPA with its citrus overtones and spicy finish.

Trois Pistoles (ABV: 9%) is a strong dark ale brewed with roasted malt and features hints of cocoa and other spices. The unique tripel wheat ale, Don de Dieu (ABV: 9%) is a fine tasting combination of a traditional yeasty Belgian ale with roasted nuts and spices. Finally there is Maudite (ABV: 8%), a strong amber-red ale with hints of citrus and a kick of hops.

Unibroue occasionally produces special edition varieties, most of the time when celebrating their anniversary. Of special note is the powerful ale on lees called “16” (ABV: 10%), which not surprisingly was brewed for their 16th anniversary.

All of Unibroue’s line of beers is recommended, especially their stronger varieties like La Fin du Monde. They are easily one of the top micro-breweries in North America. Some beer retailers carry variety four-packs featuring Unibroue’s flagship beers in one package, with the four moderate alcohol beers in another. There are also a variety 8-pack available at fine beer stores.

← Traffic Rush for the iPhone, iPad, and iPod Touch
Duvel is a Fine Belgian Ale for Beer Snobs and Everyone →